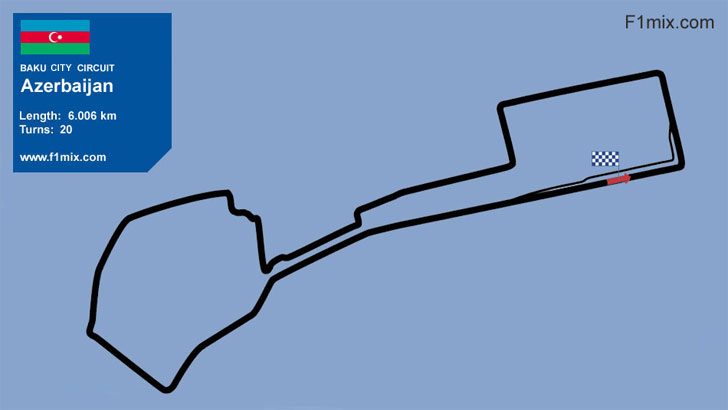 Baku City Circuit is a street circuit in Baku, the capital city of Azerbaijan. It is scheduled to host the Formula 1 Azerbaijan Grand Prix in April 2019. This will be Azerbaijan's fourth Formula 1 race. Azerbaijan is the second ex-Soviet country to hold an F1 race after the Russian Grand Prix in the Black Sea resort of Sochi.

The race is held on a temporary street circuit around Baku and incorporate its medieval old city, modern skyline and a view across the Caspian Sea. The pits and start-finish straight is placed at the Azadliq Square (Freedom Square). The driving direction is anti-clockwise. The city circuit is 6 kilometers long and features 20 turns, 8 turns to right and 12 to left. A 2.2 kilometers stretch along Neftchilar Avenue is the longest straight on the F1 calendar. The track is very fast with an average speed of over 200 km/h and a top speed of more than 350 km/h.

On a press conference before the first race Hermann Tilke, the renowned designer of the street circuit, said "Obviously street circuits present a number of challenges, in terms of circuit design, but we have been able to incorporate some unique features that will provide the teams and fans with fascinating racing."

Tilke added "For example, there will be an extremely narrow uphill section at the old town wall that will reward pinpoint accuracy and courage, and we have an acceleration section of almost 2.2 kilometers along the promenade which will see the cars running flat out at very high top speeds, something that will create an incredible spectacle for the race fans on track and the viewers at home".