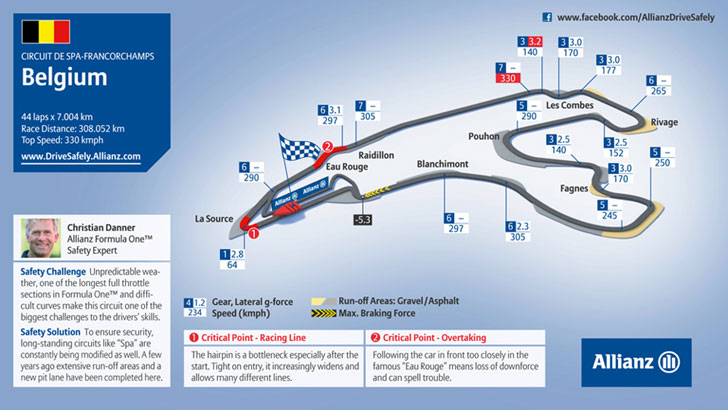 Circuit de Spa-Francorchamps is one of the classic Formula One tracks, but it is sometimes called "The greatest modern motor racing circuit in the world". It is thoroughly enjoyed both by F1 drivers and spectators. There are many reasons that drivers love Spa but mostly because it is fast, hilly, twisty, challenging and difficult to master. The circuit probably demonstrates the importance of driver skill more than any other in the world. The Belgian Grand Prix is a challenge both in terms of car set-up and in predicting the weather.

Over the years, the Spa course has been modified several times. The track was originally 15 kilometers in length, today it is 7 kilometers with 19 sweeping medium and high-speed corners, 9 right turns and 10 left turns. It still retains much of its previous character and charm. Spa has the longest full throttle section in Formula One. From the hairpin at La Source to the chicane of Les Combes at the top of the hill, the cars spend more than 20 seconds at full throttle. This period at full throttle includes the passage through the legendary Eau Rouge.

As the longest track on the Formula 1 calendar, Spa-Francorchamps has its unique problem. The place is famous for its unpredictable weather and it often rains at one end of the track while the surface is dry at the other. The teams follow the weather forecast constantly during the race. When the rain comes it typically falls in short bursts, sometimes requiring a switch to intermediate tyres. Being on the right tyres at the right time is crucial. At one stage in the tracks history it had rained at the Belgian Grand Prix for twenty years in a row.