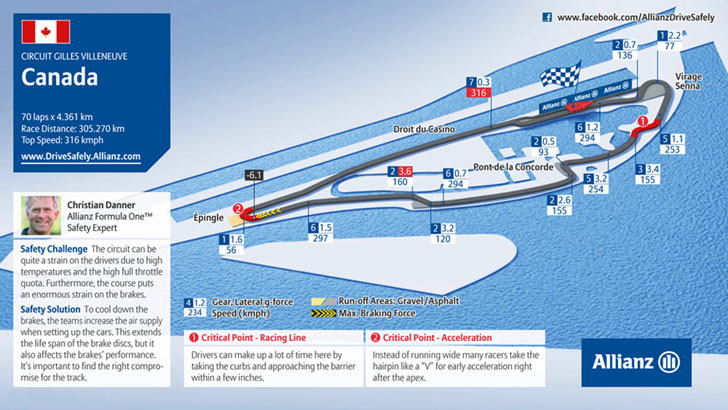 Circuit Gilles Villeneuve was renamed in honour of the popular Canadian driver following his death in 1982. It is situated on the Ile de Notre Dame, a man-made island in the middle of the Saint Lawrence River, in the city of Montreal. The original name of the circuit was Ile Notre Dame Circuit. The temporary road course is quite fast and tough on the cars, but it is not as challenging for drivers as other Formula 1 tracks. Teams with the best engine performance and durability have traditionally performed well here.

The circuit is 4.36 kilometers long and the driving direction is clockwise. A total of 13 corners with 8 right turns and 5 left turns. Turn 10 is a very tight hairpin, named L'Epingle, that offers the best overtaking opportunity and exit is also vital to catch the right line and carry momentum onto the following straight. The hairpin is one of the best options for the spectators. The last chicane is also a possible overtaking spot. Because of the temporary nature of the circuit there is no grip at all to start with, but grip levels improve constantly throughout the weekend.

Barriers run close to the circuit and many experienced drivers have been caught out by them. A particularly famous part of the circuit is the concrete wall on the outside of the exit of the final chicane. The wall has been nicknamed "The Wall of Champions" since many famous drivers have fallen victims to the wall. It acquired its nickname in the 1999 Canadian Grand Prix by ending the race of three Formula One World Champions; Michael Schumacher, Damon Hill and Jacques Villeneuve. Since then many more drivers and champions have hit the wall.