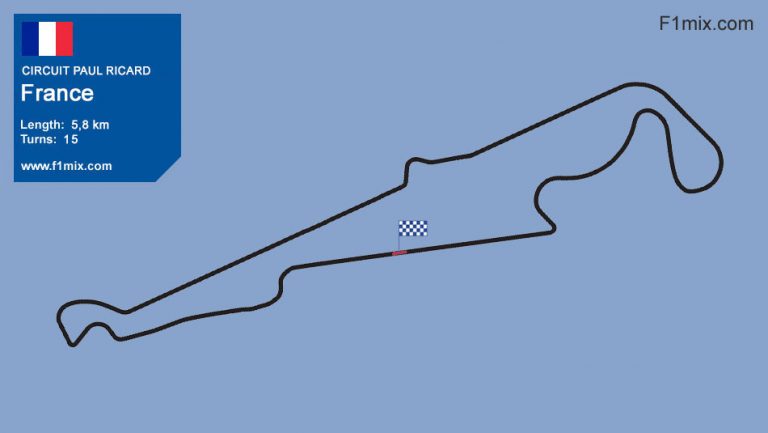 Circuit Paul Ricard is situated in Le Castellet near Marseille on France’s south coast. The circuit opened in 1970, named after Paul Ricard, a french industralist and drinks magnate who financed the racetrack. At the time it was considered one of the safest motor racing circuits in the world. The Castellet airport was also built alongside the circuit. The combination of mild winter weather, modern facilities and an airstrip made it popular amongst European teams for testing during the annual Formula One winter off-season. Le Castellet first hosted the French Grand Prix in 1971. The race was won by Tyrell driver Jackie Stewart.

The Paul Ricard circuit measures 5.8 km making it one of the longest on the F1 calendar. Like Spa-Francorchamps and Silverstone this above-average length is a guarantee of pleasure, variety and spectacle for fans and drivers alike. Famous for the Mistral straight, this circuit boasts one of the longest straights in the World Championship, at 1.8 km. In 1986 the track was modified by adding a chicane in the middle of the Mistral Straight, dividing it into two sections, to bring the speed down. The top speed are still very high, about 340 km/h before and after the chicane.

The circuit is known for its unusual design built on a plateau, it is extremely flat. The elevation ranges from 408 to 441 meters above sea level. It stands out with its distinctive Blue Zone, named after the black and blue painted runoff areas. The Red Zone, the deeper and more abrasive runoff area, circles the former and gives the Paul Ricard Circuit its memorable, colourful look. Historically known for its challenging track, drivers crowned victorious at Paul Ricard would in the past move on to win the Formula One World Championship as well.