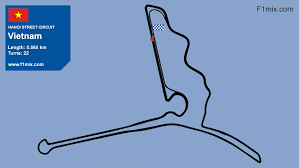 Hanoi Street Circuit is host for the Vietnamese Grand Prix. The race is held on a temporary street circuit on the streets of Hanoi, the capital city of Vietnam. The circuit is a hybrid of public roads and a purpose-built section. It is located next to the My Dinh National Stadium, a multi-use stadium in the urban district Nam Tu Liem. The district is known for its many new developments and several skyscrapers. Noi Bai International Airport is about a 30 minutes taxi ride from the circuit.

Hanoi Street Circuit is 5.56 kilometers long with a total of 22 corners. The driving direction is anti-clockwise. The circuit features a range of corners from a slow-speed hairpin and technical slow to medium speed corner combinations to high-speed esses and flatout corners. It also features one of the longest straight's in Formula One, at 1.5 kilometer in length it gives top speeds up to around 335 km/h.