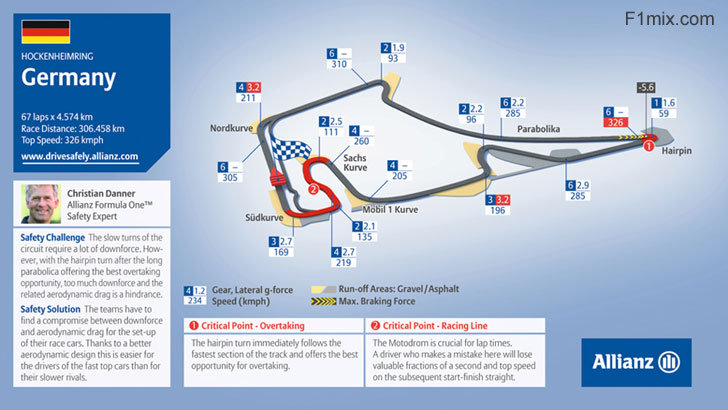 Hockenheimring, located in Hockenheim 20 kilometers from Heidelberg, hosted the Formula One German Grand Prix for the first time in 1970. The originally circuit built in 1932 used roads in the forest and it was almost eight kilometers long and only for motorcycle racing. In 1936 the circuit was expanded to be used as a test track for cars. It was last rebuilt in 2002 and the new track guarantees exciting races and plenty of overtaking opportunities.

The Herman Tilke-designed track is almost completely flat and has long straights followed by slow corners and hairpins. Top-speed and good torque is vital and the circuit is one of the hardest on brakes. The circuit is 4.574 km long and features 17 corners and 6 straights. The minimum track width is 15 meters and the direction is clockwise. The circuit has a capacity of 120,000 spectators, most of them located in the grandstands surrounding the Motodrom stadium section. One of the grandstands are sponsored by Mercedes-Benz.

Do you want to stay at a hotel really close to the circuit? The hotel Motodrom is actually integrated into the main stand of the Hockenheimring, directly on the start/finishing straight. From the restaurant you can get an unique view over the racetrack.

In 2006 Bernie Ecclestone announced that there would only be one Formula One race in Germany per year from 2007, alternating between Nurburgring and Hockenheimring. The organizers had an agreement to host the race at Hockenheim until 2018. In 2015 and 2017 there was no German Grand Prix as Nurburgring opted out due to financial problems. A further one-year deal places Hockenheimring on the 2019 calendar.

A virtual lap of Hockenheimring