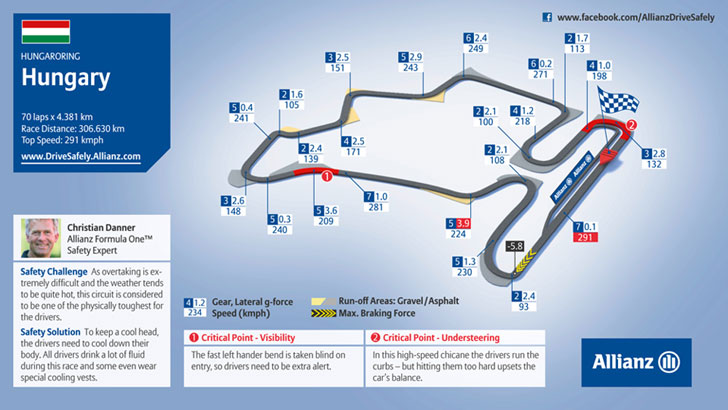 Hungaroring is regarded as very challenging and tough for the drivers, but also as one of the safest race tracks in Formula 1. The circuit benefits track position, pit strategy, and high downforce. Overtaking is difficult unless the driver in front makes a mistake, so qualifying is really important and you need to start from as high up the grid as possible. Cooling is often a problem at Hungary because of the lack of straights and it is usually pretty hot in Hungary at this time of the year. The constant cornering places a demand on the tyres, as this generates high temperatures, and this combined with high track temperature have the potential to lead to issues with blistering.

Some drivers think that Hungaroring is similar in style to Circuit de Monaco, due to its tight and twisty corners. Lewis Hamilton said "The Hungaroring is one of the most demanding circuits for drivers because you're busy throughout the entire lap.". Engines are only run at full throttle for around 55 percent of the lap, the second lowest percentage of the season after Monaco. The average lap speed is about 200 km/h, with top speed close to 300 km/h. The Hungarian race is one of the highest downforce races on the calendar.

The circuit is located just outside Budapest. Due to its unique position in a small valley about 80 percent of the 4.38 kilometer long race track can be seen from any part of the grandstands. As a curiosity can be mentioned that the 1986 Hungarian Grand Prix, won by Nelson Piquet for Williams, was the first Formula One Grand Prix to take place behind the Iron Curtain. The race was attended by 200,000 people from both Eastern and Western Europe. Since 1986 Hungary has been on the Formula 1 calendar every year and the organizers have contract until 2021.

A virtual lap of Hungaroring