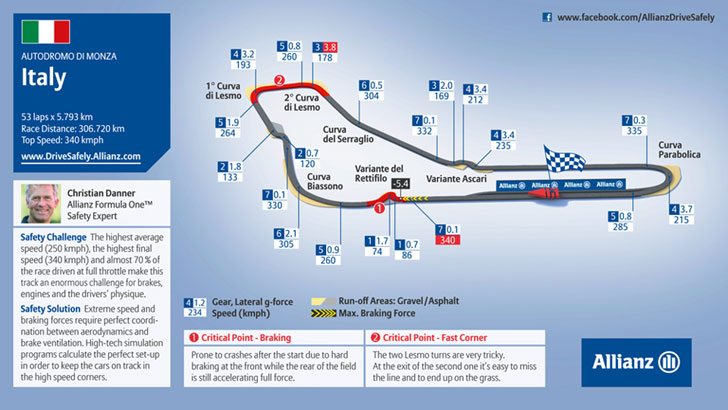 Autodromo di Monza, the Monza circuit, is one of the most historic motor racing circuits in the world. It is located near the town of Monza, not far from the Italian city Milano. Special trains, buses and shuttles allow visitors to reach the area easily and quickly. The track is full of history and the atmosphere here is very nice. The grandstands are always packed and the fans create a wonderful atmosphere over the Grand Prix weekend. The Ferrari fans, the Tifosi, call the track La Pista Magica - The magic race track.

Monza is a high-speed circuit with a top speed of 340 km/h and an average speed of around 250 km/h. It consists of very long straights and tight chicanes, therefore it is hard on the engine and brakes. Engines are run flat out for nearly 75 percent of the lap, in usually very hot conditions. The circuit is one of the toughest on the cars, as the drivers run the lowest downforce of the season and reach the highest speeds. A car using Monza wings will generate about 25 percent less downforce than the same car with Monaco wings on.

Officially opened in September 1922 with a road course and a paved oval, Monza was only the third purpose-built motor racing circuit to be constructed after Brooklands and Indianapolis. It was financed by the Milan Automobile Club and was built in only three months by 3,500 workers. The length of the original Grand Prix track was 10 kilometers, its current configuration is 5.79 kilometers. The Italian Grand Prix will remain at Monza at least until 2019 after a deal between Formula 1 supremo Bernie Ecclestone and the track's managers.