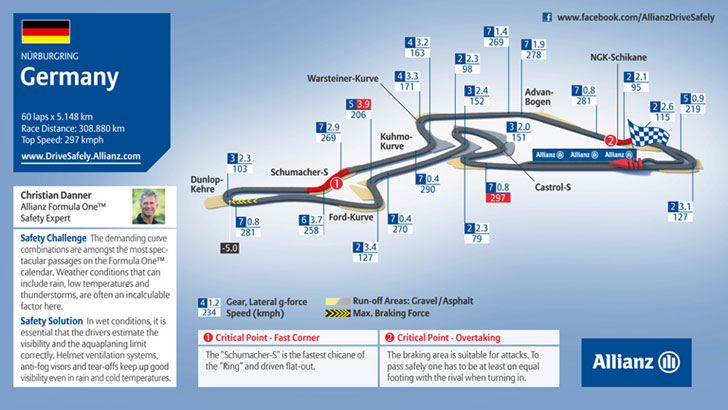 Nurburgring, often called "The Ring" by the enthusiasts, has a mix of high and low-speed corners with limited overtaking possibilities, putting a premium on qualifying and fast pit stops. As the track is located right next to the Eifel Mountains, the weather is a constant concern and may play a decisive role in the race. After a downpour on the track it really takes time to dry up. The track usually shows average tyre wear and typically a medium to soft tyre compound is used. The biggest challenge for the drivers and teams is to make sure the tyres stay up to temperature given the low surrounding temperatures.

To be competitive you need a car with good traction, which is very stable while braking. The Nurburgring also demands some of the highest downforce levels of the season. The tight and challenging circuit is 5.15 kilometers long and features 15 corners, 9 right-handers and 6 left-handers. The best overtaking opportunity is in the first corner, where drivers can take various different racing lines. It is very important to get a quick and clean exit here not to being re-passed. The NGK chicane at turns 13 and 14 is also a possible overtaking spot.

The old Nurburgring was two circuits which could be used together, making a total of 174 corners, or as separate entities. The Nordschleife (North Loop) was 22.81 glorious kilometers of tarmac and the Sudschleife (South Loop) was a mere 7.75 kilometers. Nordschleife was nicknamed "The Green Hell" by Jackie Stewart, three-time winner of the German Grand Prix. The old circuit was dropped from the Formula One calendar after Niki Lauda's accident in 1976. Several touring car series are still competing on the Nordschleife and it is also accessible for public driving.

A virtual lap of Nurburgring