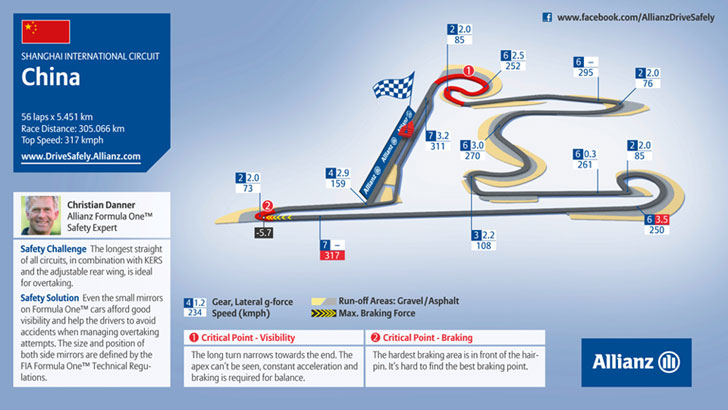 Shanghai International Circuit is 5.45 kilometers long and features 16 corners, nine right-handers and seven left-handers. A unique combination of slow spiraling corners, fast corners, hairpins, long and short straights put high demands on the braking systems in the cars, making Shanghai one of the most challenging circuits of the F1 season. In common with many other Formula 1 circuits, it was designed by German architect Hermann Tilke.

The circuit is ideal for overtaking as it has one of the longest straights, 1.1 kilometers, on the Formula 1 race calendar. The key to the long straight is the sequence of corners just prior to it and therefore downforce tends towards the higher end. The track has a width ranging from 13 to 20 meters. The highest up-going slope stands at 3 percent and the down slope 8 percent. There have been some problems with rain drainage and heavy rain often causes long safety car deployments.

Shanghai International Circuit took just 18 months to complete. The load on the soil would be too heavy to take, therefore 40,000 stone pillars were inserted into the marshland to give a stable base for the track. The venue was officially opened on 6 June 2004 and can hold around 200,000 spectators. Ferrari's Rubens Barrichello won the Chinese Grand Prix in its debut year. At a cost of $240 million, the Shanghai Circuit was the most expensive Formula One racetrack to build. Shanghai Circuit also is a place for promotions, car displays, exhibitions, press conferences, and massive activities.