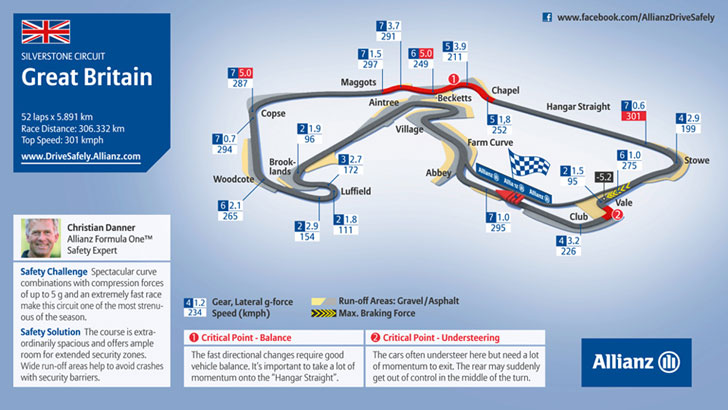 Silverstone circuit is 5.89 kilometers long and features 18 corners, ten right-handers and eight left-handers. Since 2010 the track layout includes the new Arena complex, a section between Abbey corner and Brooklands which offers three additional overtaking opportunities. The track's length was increased by 759 meters. Becketts is probably the most impressive corner with a 290 km/h bend which leads into a challenging complex. If you want to be quick at Silverstone you have to be driving a car with extremely good aerodynamic balance.

Silverstone is a historic motor sport place and the British fans are really enthusiastic about Formula One. Several teams count the British Grand Prix as their home race, since they are based in UK. Every driver and team wants to win in front of home crowd, friends and family. Usually a lot of staff from the teams goes to the race and there is always a special atmosphere which all the teams enjoy. On F1 race day a number of visitors travel to the circuit by helicopter, enough to make Silverstone Heliport the busiest airport in the country for this day.

The track is very popular among race enthusiasts and there are race meetings and events all year round. It is also possible to test your own skills by renting a car at the Silverstone Circuit.

The area was previously a Second World War Royal Air Force airfield. In October 1948 the Royal Automobile Club arranged the first racing event, the RAC Grand Prix. The winner of the race was Luigi Villoresi in a Maserati who recorded an average speed of 116 km/h to claim the first prize of £500. Silverstone circuit holds the prestigious record of being the first-ever venue for a Formula One race in the official Formula One World Championship, the 1950 British Grand Prix. Winner was Italian Giuseppe Nino Farina in an Alfa Romeo ahead of his team mates Luigi Fagioli and Reg Parnell.

A virtual lap of Silverstone Circuit