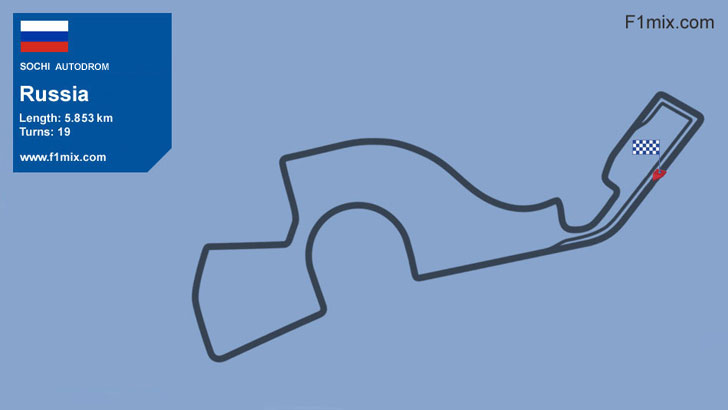 Sochi Autodrom, formerly known as Sochi International Street Circuit and Sochi Olympic Park Circuit, is a part of a venue used for the 2014 Winter Olympic Games. The Olympic Park and the racing circuit is located in the Black Sea resort city of Sochi, Krasnodar Krai, Russia ner the southern border. The surface was not laid until after the closing ceremony of the Olympics. Hermann Tilke designed the track and the first Formula 1 Russian Grand Prix was given the green light by the FIA after the first official inspection in August 2014.

Sochi Autodrom is partly integrated in the public road network and consists of two circuits. The long circuit is to be used only for Formula 1, the short circuit is supposed to function throughout the year to host multiple motorsport events. The large lap, including 1.7 kilometers of public roads, is 5.85 kilometers long and feature 19 corners, 12 right-handers and 7 left-handers. The track width varies from 13 to 15 meters and the direction is clockwise. The track's combination of straights and really fast corners makes it to one of the fastest Formula One tracks. The top speed is about 340 km/h.

Formula One chief Bernie Ecclestone signed a deal with Russian President Putin for Sochi to host the Russian Grand Prix until 2020. The Russian government spent about 200 million dollars to build the circuit that hosted the country's first ever Formula 1 grand prix. It fulfilled a long-held ambition of Putin's for Russia to be part of the multi-million dollar Grand Prix circuit, former attempts to stage a race at Moscow and St Petersburg having failed.

A virtual lap of Sochi Autodrom