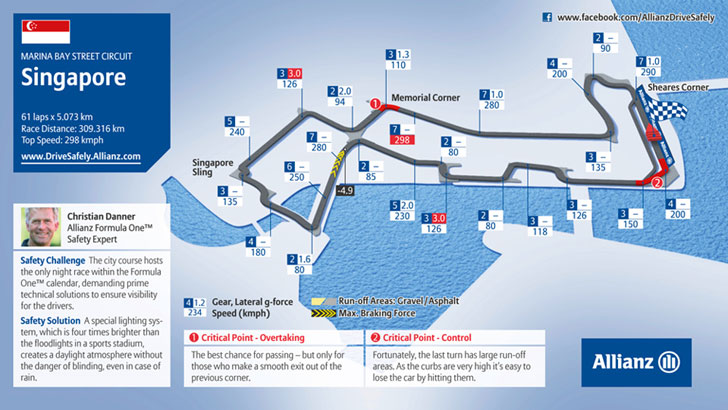 Marina Bay Street Circuit is very demanding with several 90-degree corners and a bumpy track which runs close to the walls. It is a typical street circuit with practically no run-off areas, therefore the drivers have to concentrate all the time as there is no margin for error. As with Monaco or Valencia, tyres and aerodynamics are the key factors at the Marina Bay Circuit. The race is run at night which means that if the track get wet it will take a long time to dry given both the humidity and lack of sunshine.

The Singapore Grand Prix is one of the slowest of the Formula One season, with a stop-start nature that never gives the drivers a chance to relax. Engines will be at full throttle for just over 50 percent of the lap. The average lap speed is only about 175 km/h, although top speeds approach 300 km/h down Raffles Boulevard. The circuit length is 5.07 kilometers and the direction is anti-clockwise. It is quite a long track for one in a city. There are some overtaking opportunities, like at turn four, turn seven, and towards the end of the lap.

In 2008 Fernando Alonso won the first ever Formula One night race just 2.9 seconds ahead of Nico Rosberg. During the spectacular event, 108,423 meters of power cables, 240 steel pylons and around 1,600 light projectors with a total power requirement of 3,180,000 watts was used. The timing of the night event means it can be broadcast at a convenient time for European television audiences as well as thrilling local fans. Adding to the feel of the race is the Singapore Flyer, one of the tallest ferris wheels in the world. It is situated right next to the track and affords great views of the circuit.